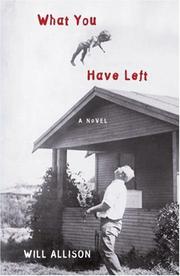 WHAT YOU HAVE LEFT

Like her NASCAR pioneer mother, Maddy, Holly is a hell-bent driver. She makes hardworking, hunky handyman Lyle mad with love, knocks back whiskey and searches for her father, Wylie, who deserted her as a kid right as Maddy perished from a blood-clot after a water-skiing accident. In shaky hands, this melodrama could border on Harry Crews’s po’-folk shtick, but debut novelist Allison keeps things steady. Alzheimer’s-ridden like his uncle and father before him, Cal, Holly’s grandfather, downs 20 sleeping pills in 1991, leaving Holly bereft. Half this story, then, is Holly’s and Lyle’s romance—their love tested by such mishaps as Lyle’s defiant burning of the Confederate flag atop the statehouse building in Charleston, and Holly’s blowing of the family savings on video-poker gambling. The other half flashes back to Maddy and Wylie—their alliance against the good ol’ boys jealous of Maddy’s race-winning ’62 Fairlane, their surviving of such outsized, small-town tragedy as the killing of his infant daughter by their next-door neighbor. In time, the storylines intersect, as Holly learns how to deal with ghosts of traumas past. From its Raymond Carver–esque title to its cast of big-hearted misfits, Allison’s picaresque isn’t terribly original. But it’s tender, smart and efficiently told. By the end, thin as a “martini toothpick,” his own mind given over to the dementia of Korsakoff’s syndrome, Wylie reunites with his daughter, and the frost inside her starts to melt: “Suddenly I’m five years old again, clinging to his neck as he trundles me away from the hole in the ground where they’ve just put my mother.”