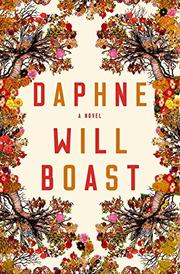 Psychology and myth twist into each other in this debut novel about vulnerability and fear.

Boast (Epilogue, 2014, etc.) writes about Daphne, who isolates herself from most other people by choice and strict routine. While her mythical namesake turns into a Laurel tree to avoid Apollo’s pursuit, this Daphne “explode[s] into lush forest,” freezing when she feels anything too intense. Her rare, unnamed condition means she absorbs powerful emotions around her, and her own feelings are paralytic: “I couldn’t move at all,” she says, recounting her first episode. Doctors postulate that her “immune system [is] blasting away at receptors in that mysterious part of the brain where muscle control, emotion, and sleep intersect.” Daphne’s adult life becomes about “at least, surviving,” avoiding feelings and seizurelike episodes. Romance is dangerous. Even books and movies can send her into a trance. In clipped sentences, Daphne narrates her daily routine: support group; work at a research center that tests medical devices on dogs; public transportation; and isolation. When she meets Ollie, an empathetic could-be suitor, she’s forced to confront her own idea that life would be easier “if only we could all stay a mystery to one another.” Ollie’s attention tests the lengths to which she’ll allow herself to get hurt. Boast leads Daphne—and the reader—through many of the Bay Area’s corners of art and culture. Daphne’s “fluttering and slumping” that result from emotion are one thing, but her real fear? “I’d twisted and twined and bound myself up inside,” she says, “to avoid death.” “When you insulate yourself against disaster, you’re always waiting for it to arrive.”

Boast’s story is rooted in myth. But it’s his perceptive take on the risks of emotion that the reader will remember.