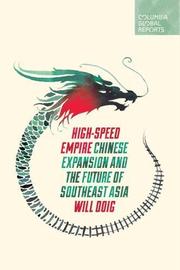 Chinese Expansion and the Future of Southeast Asia

Illuminating study of China’s ambitious efforts to extend its influence in Southeast Asia by means of a high-speed rail system.

In 1991, the city of Shanghai decided to build a metro system. The World Bank refused to support the project, saying that since most Shanghainese traveled through the city by bicycle, the subway was unlikely to find a sufficient market. Now, three decades later, the Shanghai metro is the world’s largest, extending more than 350 miles and carrying 3 billion passengers per year. The lesson is clear: China does not like to be curtailed or told that something is not possible, and given that its once nonexistent highway system now surpasses the U.S. interstate system, it is no surprise that the country has become a master of what might be called instant infrastructure. “A major thrust of the country’s economic strategy involves building infrastructure beyond its own borders,” writes journalist Doig, including an overarching effort to link nearly half the world’s landmass by rail, highways, and air and seaports. The effort, of course, undermines American sway in Asia, particularly as the U.S. takes an isolationist turn. One leg of this system, the Pan-Asia Railway, “looks tantalizingly within reach”; it would connect China with Singapore by way of Laos, Thailand, and Malaysia. The first country poses perhaps the greatest problems, since it is closely allied with Vietnam, China’s regional rival, and lacks much infrastructure at all; writes Doig, “Laos’s most valuable contribution to the Pan-Asia Railway might simply be a path southward.” Thailand poses comparatively fewer problems and has lately sent more exports to China than the U.S. Though Malaysia is mired in corruption, few obstacles seem to stand in the way—and even if there were, writes Doig, China is noted for its fluidity in overcoming them.

Whether China succeeds is, of course, for the future to tell. That it has emerged so rapidly as the region’s superpower, though, makes this brief study particularly timely.