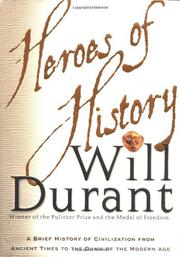 The result of an unfinished manuscript discovered 20 years after the author’s death, here are 21 chapters of world history, from ancient China to Shakespeare.

Durant (1885–1981) was near 90 on publication of the 11th volume of his gargantuan history, The Story of Civilization, and he was 92 when he began a series of audiocassette lectures that were to summarize these volumes with emphasis on key figures. Most were completed and many recorded by the time of his death, and here, they make up not so much a one-volume world history as a quirky collection of essays that race through long periods, pausing at intervals for the biography of an important figure. China occupies 12 pages, half devoted to Confucius and the poet Li Po. Nine pages cover Indian history, all but two telling of Buddha and the Ghandis. Clearly more at home in western civilization, the author devotes a generous four chapters to Rome, three to ancient Greece, and the same number to the Renaissance and Reformation. All deliver good capsule histories of these periods along with the lives. Because Durant was educated early last century, his scholarship is centered on Europe and emphasizes great men—an approach that, while politically incorrect, isn’t bad history, just out of fashion. The problem with Durant is that he is not a historian but an educator. One reads good history for pleasure, but Durant for self-improvement. In clear prose, he presents the facts, but the personal opinions he hopes to transmit are those of an educator: a deploring of vice, admiration of virtue, sympathy with the oppressed, a love of art and literature.

For a good, single-volume introduction to world history, Read J.M. Roberts’s History of the World (1993). As history, Durant’s posthumous work is choppy, though it’s a good introduction to the author.