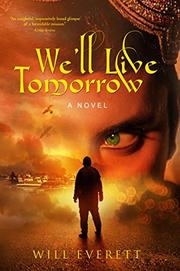 From debut author Everett comes a novel about contemporary chaotic life in Afghanistan.

“Aid work was my life,” Hunter Ames says. The divorced, middle-aged, former Peace Corps volunteer tries to do his small part to help rebuild war-torn Afghanistan, working for USAID, an American enterprise engaged in various projects to help the people of Afghanistan (and elsewhere) while building a positive relationship with its people. It’s a job full of difficult personalities, corruption, and tremendous amounts of American money. “What Is Not Spent Cannot Be Billed,” Hunter’s boss stressed—“He referred to it as something so absolute and unquestioned that it might have been chiseled into stone tablets”—meaning in effect that large amounts of taxpayer dollars had to be spent regardless of the usefulness in doing so. Because insurgent attacks and irate Afghanis were always a possibility, the job was dangerous and frustrating. Amid this quagmire is green-eyed Karimullah, a young Afghani man who escaped a life of forced prostitution in “the hidden world of bacha bazi.” Karimullah works for Americans such as Hunter, though doing so puts Karimullah’s life in danger. How will these two ever survive a place as unstable and disjointed as Afghanistan? Everett offers an authentic look at the strange world of foreign aid work, with subject matter ranging from office politics to suicide bombers to the human need to be part of a group: “We’re tribal creatures,” says an acquaintance of Hunter’s. The story goes deeper, exploring the former lives of Hunter and Karimullah in places that have little to do with the United States government. For instance, thinking about his son, Hunter reflects: “What do we ever really know about our parents?” Details of bureaucratic life can prove dull, however, particularly with the attendant emails and meetings: “I had a meeting planned that afternoon with the contractor who would be filling an order for farm machinery,” Hunter says. Yet, on the whole, the narrative composes a realistic and touching image of the men and women involved in this complex relationship and the infinite trials of an operation as arcane and immense as rebuilding a nation.

Occasionally drab due to its subject matter, but an insightful, impressively broad glimpse of a formidable mission.