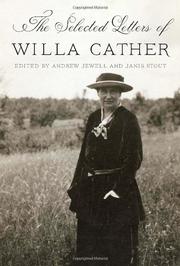 THE SELECTED LETTERS OF WILLA CATHER

A revealing, even revelatory collection of correspondence from Willa Cather (1873–1947), a woman who never wanted her letters made public.

Editors Jewell (Digital Projects/Univ. of Nebraska; co-editor: The American Literature Scholar in the Digital Age, 2010) and Stout (Willa Cather: The Writer and Her World, 2000) offer a brief introduction explaining how these letters came into print—and note the virtual absence of letters to two of Cather’s most intimate women friends, Isabelle McClung and Edith Lewis. (The latter lived with Cather for many years.) Then the editors retreat, re-emerging only to introduce each division of the text and offer some light but welcome annotations. The letters begin when Cather is a teenager in Red Cloud, Neb., and end just weeks before her death. And what a story they tell. We follow her to college in Lincoln, Neb., where she also began her journalism career; to Pittsburgh, Pa., where she continued as a journalist and a high school English teacher; to New York City, where she worked for McClure’s and began publishing the stories and novels that would eventually earn her celebrity, creature comforts, many honorary degrees, a 1923 Pulitzer Prize and exchanges of letters with the likes of Robert Frost, Thornton Wilder, Sinclair Lewis and Langston Hughes, who wrote about his appreciation for the portrayal of African-Americans in her final novel, Sapphira and the Slave Girl (1940). There are also many letters to family members—especially to her beloved brother Roscoe—and to friends from childhood and early adulthood, including lifelong friend Carrie Miner Sherwood. The letters reveal Cather as a consummate professional, demonstrating her assiduous work habits and her continual reminders to her editors and publishers about how she wanted her books to look and be marketed. Other notable recipients of her letters included John dos Passos, Ford Madox Ford, Alfred A. Knopf, H.L. Mencken and Rebecca West, and the editors offer a helpful biographical dictionary for each recipient.

A splendidly edited, generous gift to lovers of Cather and American literature.