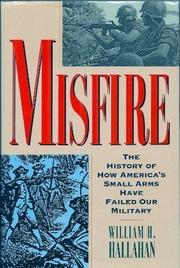 The History of How America's Small Arms Have Failed Our Military

Hallahan's polemic against internal regulations within the national armaments industry is also a history of America's war machine since the founding of the Springfield Arsenal during the Revolution. Because the British had forbidden manufacture of muskets and ammunition in the colonies, the Americans had to invent an irregular form of warfare based on guerrilla tactics that made the best use of limited amounts of precious ammunition. The Revolutionary War demonstrated the effectiveness of the rifle, used as a sniper's weapon from long rage and from behind cover, over the bayoneted musket favored by the British. The rifle triumphed. But Edgar Awardwinning mystery writer turned military historian Hallahan's (Tripletrap, 1989, etc.) thesis, in germ, is that an obsession with conserving ammunition was to dominate American small-arms thinking for the next two centuries, resulting in the M- 16, which fires in economical bursts of three to five shells but which is outgunned by the continuously firing Kalashnikov. GIs found this a murderous disability in Vietnam, where they often abandoned their M-16s in favor of the Russian weapon. Ultimately, of course, Hallahan's target is the sclerotic, tradition-bound mentality of military establishments in general. We see the evolution of the US Ordnance Corps from its inception by the ebullient Henry Knox, the brilliant artillery engineer of the Revolution, and follow its aggrandizement into the arena of modern warfare, where the ``fixed tradition'' of the ``grave-belly long- range sharpshooter'' persisted. Hallahan guides the reader with a sure hand through the obscure but somehow ghoulishly intriguing complexities of weapons logistics: the creation, for example, of Earle Harvey's T-25 automatic rifle after WW II becomes, in the author's hands, a psychological and Cold War political thriller. Such dramatic narrative is unexpected in a book devoted to a subject that would at first appear to be of interest only to West Point cadets and jarheads. (Author tour)