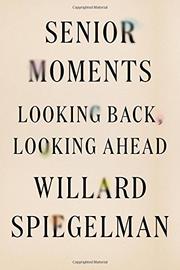 Looking Back, Looking Ahead

A wide-ranging collection of essays reflecting the septuagenarian author’s rejection of the more hysterical predictions of cultural doom.

Spiegelman (English/Southern Methodist Univ.; Seven Pleasures: Essays on Ordinary Happiness, 2009, etc.) believes that life is not “a dress rehearsal,” that the time we have on Earth is all that we will have, and that inhabiting the moment is vital. But the title of the book, however witty, is misleading. The author’s reflections on aging provide only the framework, not the essence, though he is uncommonly wise on the subject. Most engaging is “Talk,” in which he reflects on the performance art that is conversation and the brush strokes that are language. Free form at its best, with an intimacy connecting the give-and-take, conversation is not only the fundamental human art form, but also, in Spiegelman's view, the scaffolding of commerce and democracy. Yet speech, “our glory, is also our embarrassment and our shame” when the volume grows intrusive. As someone devoted to literature, the author’s sensibilities lean heavily toward the life of the mind and immersion in the arts, especially poetry, and at times he can come across as faintly effete. In matters of taste, he can be dismissive of predilections that are less aesthetically oriented. But he is unassailable in contemplating the glories of books and reading; the delusions (and gratifications) of nostalgia; the plague of noise; and the virtues of a silent, solitary study of a work of art. A regular contributor to the Wall Street Journal, the native Philadelphian was the longtime editor (1984-2016) of Southwest Review, living for 40 years in Dallas before his recent escape to Manhattan.

Spiegelman's preference for masters of “cool clarity, sharpened perception, and a transparent style” is revealed in his own writing, which is lucid and propulsive, opening portals to heightened enjoyment of the time we have.