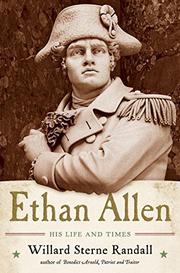 His Life and Times

Randall (History/Champlain Coll.; Alexander Hamilton: A Life, 2003, etc.) delves beneath the myth to fashion the definitive biography of the frontier hero and founder of Vermont.

Best known for leading his paramilitary Green Mountain Boys on a daring attack on British-held Fort Ticonderoga, at Lake Champlain, on May 10, 1775—the first American action in the Revolutionary War—the charismatic Allen was a Connecticut-born farmer, businessman and politician who would become an American folk hero. Self-educated, foul-mouthed and over six feet tall (unusual for the time), he was celebrated for his legendary physical prowess. He could lift a bushel bag full of salt with his teeth and throw it over his head, the stories said. “He was a Paul Bunyan before Bunyan ever existed,” writes Randall. When Allen first moved to Vermont in 1770, the territory was claimed by both the colonies of New Hampshire and New York. Determined to see Vermont become part of New England, where he owned land, Allen and his militia waged a five-year campaign of intimidation to drive away New York settlers. This same rag-tag band of Vermont farmers and hunters took Ticonderoga, without the Continental Congress’s approval, shortly after hostilities began at Lexington and Concord. Randall’s authoritative, vivid book is especially good on Allen’s nearly three-year imprisonment after his failed attack on Montreal in 1775. Harshly treated, first in England and then in New York, he was finally released in a prisoner exchange. He then served Vermont as commander of the militia, chief diplomat to the Continental Congress and advisor to the governor. “The war hero, the counselor of state, he became the public face of Vermont, inside and outside the republic,” writes the author. Allen’s prison memoir was a bestseller during the Revolutionary era.