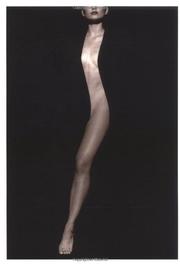 Photographs of the Human Form

by William A. Ewing

Through thoughtful essays, Ewing (Breaking Bounds, not reviewed) transforms a fantastic collection of photographs into a history of photography itself. With careful arrangement and stylish writing free of art- critic blather, Ewing has rendered accessible an almost intimidatingly wide range of works. The introduction covers attitudes toward photographed nudity (and therefore toward sexuality), beginning with a photograph of two topless Zulu women published in a British magazine circa 1879. Setting a pattern for the remainder of the book, Ewing discusses how these photographs reproduced their subjects and simultaneously served as a mirror for contemporary British culture. Chapters carry vague titles like ``Probes'' and ``Metamorphosis,'' which are pithily defined (in these cases as ``the realm of scientific exploration'' and ``the body transformed,'' respectively). Each section starts with a mini- essay expounding a basic principle and tying together the photos. For example, ``Flesh'' links Regina DeLuise's nude woman gripping the heavy, knotted rope of a tire swing and Robert Davies's close- up of a navel. ``Eros'' ponders the personal nature of sexuality, and an 1865 photograph of one woman inserting an umbrella in a second, tuba-playing model's behind is grouped with some squeaky- clean, pin-up-style shots from the 1950s. The shocking chapter entitled ``Estrangement'' contains a range of striking, often disturbing images, including a servant crucified for killing his boss's son and a grotesquely obese sideshow man with a relatively tiny towel placed over his behind, as well as a series showing ``the Hilton Siamese Twins of Texas'' cheerfully swimming, playing tennis, dancing, and flirting in tandem. Some ground is covered twice, and there is an occasional oversight (the essay on ``Estrangement'' brings up the 19th-century popularity of photographs of corpses of loved ones, but no examples are offered). Overall, however, the result is engrossing and the balance of text and photos just right. Stunning, clever, and very provoking.