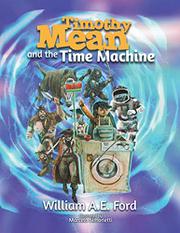 TIMOTHY MEAN AND THE TIME MACHINE

A naughty boy creates his own time machine for a rhyming adventure each day of the week in this off-the-wall debut from Ford with illustrations from Simonetti (The Adventures of Dust Bunny, 2017, etc.).

Bored of playing with his “star wars sword,” Timothy Mean decides to use all the random items in his garage to build a time machine. The troublemaking child, whose almost-mean sense of humor may appeal some readers, immediately sets off to use the device, traveling to the age of Vikings on Monday and cutting off a Viking’s beard. Tuesday, he yanks the tail of a T-Rex. Wednesday, he pranks his parents when they were kids. Thursday he pulls down Neil Armstrong’s pants during the moon landing (showing that the machine can traverse both time and space), revealing heart-covered boxers. Friday, he bizarrely leaves reality behind for a dragon ride, tormenting a medieval king. Saturday, he sends pirates walking a plank, and Sunday, he deprograms futuristic robot teachers to give kids a day off from school. The ending pages leave some doubt about whether everything happened in his imagination. The highly textured digital images are a mixture of realistic and cartoonish images that have plenty of details to explore. A repeating refrain urges children to join in each day of the week.

Told with rhymes that are a bit pedestrian, Timothy’s pranks are mean-spirited enough that more sensitive readers will miss the humor.