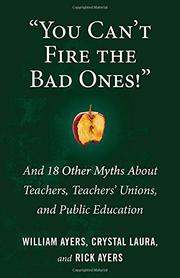 "YOU CAN'T FIRE THE BAD ONES!"

And 18 Other Myths about Teachers, Teachers Unions, and Public Education

A methodical dismantling of the coordinated tenets of the free market assault on public education.

Education professors William Ayers (Univ. of Illinois, Chicago; To Teach: The Journey of a Teacher, 2010, etc.), Laura (Chicago State Univ.; Being Bad: My Baby Brother and the School-to-Prison Pipeline, 2014), and Rick Ayers (Univ. of San Francisco; An Empty Seat in Class: Teaching and Learning after the Death of a Student, 2014, etc.) bring formidable progressive rhetoric to the reform debate. They argue against the conservative refrain that "unruly students, lazy and incompetent teachers, and apathetic administrators together destroy an adequate academic environment." They view this outlook as specious and so multilayered that it demands a fully structured response. Consequently, they debunk 19 "myths" contributing to this free-wheeling scorn toward public education. The authors touch on many aspects of this discussion, including controversies around charter schools, privatization initiatives, and inequitable allocation of resources. In each chapter, the authors point out the slick bombast of figures like Michelle Rhee and Donald Trump—e.g., the assertion of “the disastrous consequences of allowing the teachers’ unions and their special interest bosses to hold sway over future generations.” They rebut these conceits with a “Reality Check,” evidence-based narratives contradicting each purported reactionary viewpoint. It’s an effective approach, as when they argue that high-pressure standardized testing does not give education a high-priced corporatized sheen but confers advantages to the privileged and amplifies stress for all students. Furthermore, the myth that “Good Teaching is Entirely Color-Blind” is alluring because it “fails to take aim at the institutional and societal structures of privilege and oppression based on race.” The authors also attack the pernicious idea that “Teachers Have It Easy” by explaining how experienced, compassionate instructors “are being driven out of the profession in record numbers.” The authors render their arguments with strong rhetoric, but in emphasizing multicultural awareness and unorthodox teaching methods as solutions, they may not sway the mainstream conservatives whose views they ably counter.

A valuable compendium of responses to the shallow, classist hostility to public education.