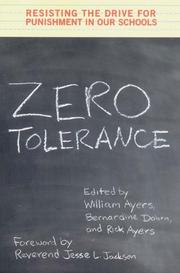 Resisting the Drive for Punishment in Our Schools

An analysis of the “zero tolerance” policies often implemented in today’s schools, and the ways these policies have disproportionately affected black and Latino students.

“Zero tolerance” initially meant that any student bringing a gun to school would be expelled for up to two years. In many schools, however, the policy has come to cover not only realistic replicas of firearms and knives, but objects that, by virtue of their shape or design, could cause any physical harm, or even give the appearance of being able to do so. It is this nebulous wording that has the editors worried. William Ayers (A Kind and Just Parent, 1997), Dohrn (director, Children and Family Justice Center/Northwestern Univ.), and Berkeley High School teacher Rick Ayers argue that the rates of school punishment for black students exceed rates for white students. Clear examples in support of their theory are periodically given: A white student in Vermont was neither suspended nor expelled for bringing a loaded shotgun to school, while an African-American student in Rhode Island was suspended for offering to dislodge a computer disk with a penknife. At other times, the authors’ rhetoric misses the mark: When six African-American students expelled for fighting try to return to their campus illegally, the situation is likened to “the 1957 placement of National Guard troops at Central High School in Little Rock.” One wishes the editors had declared zero tolerance for purple prose: “Tears moistened the principal’s eyes as she watched the axe fall on twelve-year-old Arturo, a student she had known since she first became the principal of the elementary school on Chicago’s South Side.”

Even so, these are mostly sound essays illuminating how the media’s coverage of juvenile crime has led to blanket policies that can make little sense.