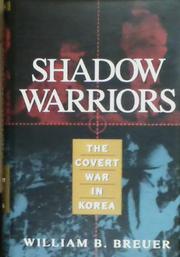 The Covert War in Korea

by William B. Breuer

In an engrossing tale of unsung heroes and high-risk missions, military historian Breuer (Feuding Allies, 1995, etc.) penetrates the little-known espionage, propaganda, and guerilla operations of the Korean war. When well-equipped, Soviet trained North Korean troops crossed the 38th parallel on June 15, 1950, in what Breuer calls a ``second Pearl Harbor,'' the overmatched South Korean defenders were quickly driven into a small pocket in southeastern Korea called the Pusan Peninsula. There they held fast, with the emergency support of newly arrived (but inexperienced) American troops. The covert war began almost immediately. General Douglas MacArthur's special warfare unit spread disinformation before his surprise landing at Inchon in the enemy rear. Army and CIA units trained many South Koreans and sent them North to spy and to carry out guerrilla operations, often with great success. Yet the North Koreans and their Chinese allies had their covert victories, too. Communist forces often seemed to know when and where the UN forces would attack. Breuer tracks these leaks back to the highly placed British traitors Philby, Burgess, and MacLean, who sent copies of US plans to Moscow. And the Communist propaganda machine lied so effectively about American ``atrocities'' that some countries demanded investigations, while, Breuer reveals, the Communist military tortured and killed POWs (including Americans) and civilians. While China and the Soviet Union were officially neutral in the war's early days, Breuer finds that Chinese and Soviet soldiers and airmen (with their equipment and supplies) were covertly available to the North Koreans, as they were later to the Communists in North Vietnam. Built on personal interviews and sound secondary research, Breuer's account should please both students of modern military history and espionage enthusiasts. (30 photos, maps)