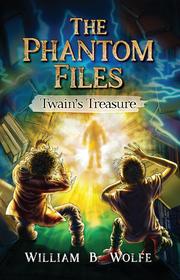 From the Phantom Files series

by William B. Wolfe

Alex’s ability to talk with ghosts puts him in famous company when he and his mom move to Hannibal, Missouri.

Alex, 13, is driven by bitter determination to keep his lifelong ability secret, since it’s already led to a diagnosis of schizophrenia that drove his parents apart and cost his mother a decent job, but it’s not easy. For one thing, his new friend, Bones, is a positively obsessed amateur ghost hunter, and for another, ghosts just won’t leave him alone no matter how rudely he treats them. Notable among the latter is Mark Twain himself, as acerbic and wily as he was in life, who is on the verge of involuntarily degenerating into a raging poltergeist unless Alex can find the unspecified, titular treasure. Alex’s search takes him through Clemens’ writings and tragic private life as well as many of the town’s related attractions on the way to a fiery climax in the public library. Meanwhile, Alex has an apotheosis of his own, deciding that lying to conceal his ability and his unhappy past isn’t worth the sacrifice of a valued friendship. Conveniently for the plot’s needs, Clemens and other ghosts can interact with the physical world at will. Wolfe parlays Alex’s ingrained inability to ignore ectoplasmic accosters into some amusing cross-conversations that help lighten his protagonist’s hard inner tests. The cast, living and otherwise, presents as white.

A patchy tale flickering repeatedly from light to dark and back.