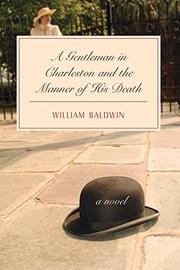 A GENTLEMAN IN CHARLESTON AND THE MANNER OF HIS DEATH

The real-life 1889 murder of Charleston newspaper editor Frank Dawson is the inspiration for Southern storyteller Baldwin’s latest (Heaven Is a Beautiful Place, 2000, etc.).

Three years after an earthquake flattened the city of Charleston, S.C., Dawson, a prominent liberal, was violently murdered by a local doctor, a man who’d been scheming to elope with the Dawsons’ Swiss nanny. Baldwin lightly fictionalizes this tale, setting up a complicated web of intrigues and unfulfilled loves that center around the life of David Lawton and his literary wife, Rebecca. Also featured are Rebecca’s sister Abbie; Abbie’s estranged husband, André; the governess, Hélène; and the mysterious figure of a psychic/prostitute alternately called Mary, Mrs. Patrick or Madame Chazzar. Midway through the tale, the narrator reveals himself to be the aspiring belletrist son of this mysterious woman, who may or may not also be Lawton’s illegitimate son. The story has many twists, but the multiple leaps through time, which seem to layer and deepen the plot’s various mysteries, add a slightly hollow mystique for which there is no eventual payback.