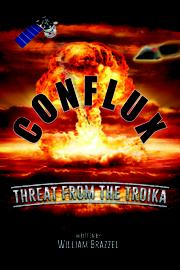 Threat From the Troika
by William Brazzel
GET WEEKLY BOOK RECOMMENDATIONS:

A veteran Special Forces officer, now working as an investigative journalist, must contend with an extremist group plotting an attack in the United States in Brazzel’s (The Seventh Holy Man, 2014) thriller.

For his latest New York International News article, middle-aged reporter Sean Carrol, with photographer Wayne Deeter, will be interviewing Carl Dietrich, the leader of a German paramilitary organization called Deutsche Christen, which has members in the United States. Carrol didn’t really have a choice; the right-wing organization forced his hand by abducting his 12-year-old niece, Amanda, and 10-year-old nephew, Danny. The journalist obeys, but Dietrich refuses to release the children until he approves the completed article—and Carrol conducts a second interview with the group leader. It’s hardly surprising when Dietrich later changes the terms again and continues to hold onto his hostages. Deutsche Christen has multiple camps, but their locations are unknown. Still, Carrol is determined to find his niece and nephew, especially after a military rescue attempt fails. He later reunites with his former elite Special Forces unit for extensive training for another mission. This incenses Dietrich, who sends men to make a direct assault against Carrol. The journalist suspects that the group has something larger in store; then a former Deutsche Christen member warns that the group is planning attacks in America, and the CIA hints that a “foreign entity” may be linked to it. The Special Forces unit prepares for more action when it’s apparent that Deutsche Christen’s strike could have global consequences.

Brazzel’s straightforward prose throughout suits the typically stoic protagonist, who narrates the tale. Carrol meticulously describes everything, even the mundane, such as his morning routine of feeding and/or walking his ever faithful German shepherd, Boynton. This approach occasionally results in moments of suspense: during one of those walks, both Carrol and Boynton spot a man who, it appears, is watching them a bit too intently. But the writing is at its strongest when it comes to hearty scenes of action: “The guard gasps and then collapses after his larynx has been crushed. We deposit his body in the grassy overgrowth just within the camp perimeter and then hurry back to the edge of the river bank.” Carrol is an enthralling, well-developed character; it’s revealed that he lost his wife, Debbie, a few years ago to cancer and may have a new romantic interest in neighbor Linda Mancuso, an FBI retiree and childhood friend. There are also some effective spy-fiction elements, as when an anonymous caller warns the journalist that he’s in danger, and Carrol deduces that someone close to him has betrayed him. The plot can sometimes be perplexing, though; for example, the reasons why Dietrich demands the interviews and corresponding articles are never made clear. Still, Brazzel knows how to escalate tension gradually for optimal effect: Deutsche Christen’s plan gets bigger as the story progresses, and by the end, there’s a frighteningly good chance of a worldwide conflict.

What this thriller lacks in nuance, it makes up for in copious action.

THE GIRL IN GREEN
by Derek B. Miller
Fiction