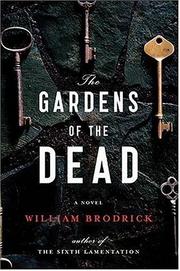 THE GARDENS OF THE DEAD

Friar, a former barrister, struggles with the troubled legacy of a dead colleague.

Monk-turned-barrister Brodrick’s second featuring Father Anselm (The 6th Lamentation, 2003) is that uniquely British brand of thriller: no violence (except in the past, obliquely sketched) and no sex—just a plot as byzantine as an obscure chess gambit and suspense driven largely by threatened exposure of the commonalities lurking beneath class distinctions. When Elizabeth Glendinning, a respected London solicitor, dies suddenly of a congenital heart ailment after visiting a flea market, she’s already disseminated a blueprint for the comeuppance of an unsavory client, Graham Riley, whom she once reluctantly defended against a charge of procuring runaway teenagers as prostitutes. Her former co-counsel, Anselm, departed the law for the monastery after his cross-examination of a key witness, George Bradshaw, goaded the latter into fleeing the courtroom, resulting in Riley’s acquittal. Now Anselm, per posthumous instructions, seeks former homeless-shelter manager Bradshaw, who departed home for the streets after his son, John, tried to vindicate his father and drowned under suspicious circumstances. The police were unable to pin John’s murder on prime suspect Riley, who now operates a marginal salvage business with his long-suffering wife, Nancy. Elizabeth apparently thought she could destroy Riley’s reputation by exposing a double set of books, which would somehow facilitate the reopening of the murder case. Or so Anselm and readers suppose throughout the bulk of this book. In meetings on the streets, Elizabeth and Bradshaw had plotted Riley’s downfall. Bradshaw, whose short-term memory was impaired after a beating by young toughs, is supposed to deliver to Anselm notebooks on how evil might be undone, and an envelope containing the goods on Riley—but he misplaces them. When Elizabeth’s plan for exposing Riley proves faulty, the real, unlikely history linking Elizabeth, Bradshaw and Riley emerges. Only the compelling sway exerted by Brodrick’s characters and language render this unwieldy, non-sinister and at times maddeningly non-cohesive narrative impossible to put down.

Justice and gratification delayed, but not denied.