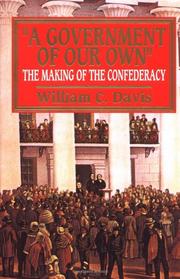 'A GOVERNMENT OF OUR OWN'

The Birth of the Confederacy

An authoritative account from Civil War historian Davis (Jefferson Davis: The Man and His Hour, 1991) of the would-be Founding Fathers of the Confederacy. In February 1861, delegates from six states in the Deep South met in Montgomery, Ala., to form their own nation. Despite constant invocations of the spirit of 1776, their movement, in their own view, aimed at reform rather than revolution. Davis (no relation to the Confederate president) traces how the delegates hammered out a constitution that protected slavery, selected Jefferson Davis and Alexander Stephens as provisional president and vice president, and erected the jerry-built governmental apparatus that would turn their dreams of secession into reality. They were a varied lot, from ``fire-eaters'' who expected a swift, comparatively bloodless separation from the Union, to reluctant secessionists who correctly feared a slaughter. By May 1861, when the capital was moved to Richmond, Va., the seeds of the new government's destruction had already been planted. Davis disputes the often-suggested epitaph for the Confederacy, ``Died of States Rights,'' but his own account demonstrates that the correct label might better read, ``Died of States Rights and Swollen Egos.'' However idealistic the delegates might have been initially, by the time they moved to Richmond they were already beginning to regard Jefferson Davis with suspicion, arrogance, and frustrated ambition. Believing that ``the finest statesmen the South had to offer composed that Provisional Congress,'' William Davis is more charitable than the group deserves, and his narrative moves slowly. But he makes fine use of hundreds of often previously unpublished letters, diaries, and memoirs, and he deftly captures the capital's climate as officeholders, office seekers, lobbyists, businessmen, and transients joined the mosquitoes in infesting Montgomery. Despite its flaws, a useful history of a relatively undercovered aspect of the Civil War. (16 pages b&w photos, not seen)