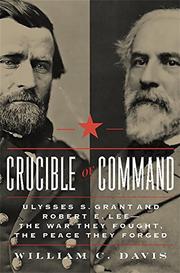 “The cheering proved to be our folly.” Thus said Robert E. Lee, chiding Southern vanity at the outbreak of the Civil War, the setting for this thoughtful study of command.

Recognizing that plenty has already been written about the generals who led the Civil War on both sides, Davis (History/Virginia Tech Univ.; The Rogue Republic: How Would-Be Patriots Waged the Shortest Revolution in American History, 2011, etc.) takes an interesting approach, using secondary sources and correcting them where applicable and relying on first-person, contemporary accounts of Lee and his formidable adversary, Ulysses S. Grant. The men had met in the field in the war with Mexico but had traveled in different orbits, Grant in particular having a flair for, if not always success in, business. Both, however, inclined to the depressive and carried the burden of the literally countless men who died in their service. Lee, writes the author, was opposed to secession and, by his account, was a reluctant slaveholder; moreover, he professed that his country was Virginia, a sentiment radical South Carolinians returned by suspecting Lee of lukewarm devotion to the cause. Yet Lee was a faithful lieutenant to the Southern government, and Jefferson Davis in particular, even though his “mistrust of politicians kept him aloof from the political morass.” Grant was less aloof, carefully gauging political mood swings, though Lee was no slouch, either, as when he instructed his Virginia troops in battle in Maryland to pretend “to be Marylanders holding their own ground,” thus rallying their allies and evidencing “a neat bit of political and diplomatic camouflage showing Lee’s subtlety in areas other than military.” Indeed, one of Davis’ chief contributions in this accessible, well-written study is to show how thoroughly politicized the war was—as was its aftermath, revealed by a charged but by no means unfriendly meeting the two had in 1868, when Grant was in the White House.

A fresh look at the sources and a careful eye to leadership and character places this book high atop the list of recent Civil War histories.