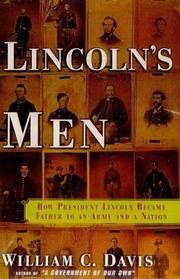 How President Lincoln Became Father to an Army and a Nation

A worthwhile, though hardly groundbreaking study of the emotional bonds forged between the average Union soldier and “Father Abraham” Lincoln. Historian Davis (“A Government of Our Own”: The Making of the Confederacy, 1994, etc.) borrows copiously from the correspondence and diaries of Union soldiers to argue that Lincoln was revered by his troops as a kindhearted father figure. Although most of Lincoln’s face-to-face encounters with Union troops were brief, he left an enduring impression on them. Lincoln’s mesmerizing eloquence, combined with his melancholy face, convinced the average soldier that “he suffered as they did . . . he, too, was a casualty” of war. Davis vividly re- creates the comic first impression most soldiers got of their president—a gaunt, tattered Lincoln saluting them from an undersized horse during military review ceremonies. While the soldiers enjoyed lampooning Lincoln’s ugliness and backwoods manner, they sensed implicitly that he cared deeply about them. Lincoln constantly voiced appreciation for the average Union soldier, which did wonders for flagging military morale, especially after the carnage of Gettysburg. Lincoln possessed a common touch that even the lowliest private could feel. Of course, Lincoln’s popularity among the troops was tested. The Emancipation Proclamation angered thousands of white, working-class soldiers who feared economic competition from freed slaves. Lincoln’s removal of General George B. McClellan was another test. When Lincoln faced McClellan in the 1864 presidential election, however, the troops voted overwhelmingly for “Father Abraham.” Davis meticulously recounts Lincoln’s efforts to gain the army fair pay, humane living conditions, and adequate medical care. In one delightful chapter, the author describes Lincoln’s policy of freely granting leniency to soldiers convicted at courts-martial. Lincoln was particularly merciful to the young, the stupid, and the inebriated. It’s no surprise, then, that Union soldiers immortalized him in his death. While Davis’s insights aren’t particularly new, his examination of Lincoln from the viewpoint of the average Union soldier confirms “Old Abe’s” undeniable genius as a wartime leader.