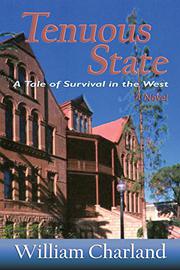 A college dean with a checkered past confronts challenges at a failing university in this debut novel.

Connor Ransom’s first career as a minister ended spectacularly: He had an affair with a parishioner, Lisa Nordeen, whose husband, Ned, jumped off a bridge after discovering her indiscretion. Ned survived the fall, but died by suicide later, after Connor skipped town with help of his boss, Sterling Holmes. Connor started over as a professor of religion at Ocotillo University, an unheralded college in New Mexico that’s fraught with internal dysfunction. Its president, Walter Driscoll, elevates Connor to the position of dean after only two semesters and promptly retires, leaving the professor to fend for himself. But when Connor’s old boss, now called Sterling Holmes-Ortega after getting married, astonishingly becomes the college president, it puts the new dean in a bind. Sterling becomes obsessed with quantifiable assessment of the college—his aim is to transform it into the nation’s “foremost Accountable University”—and he compels Connor to join his charge. Connor tries to unravel Sterling’s intentions with the help of Teresa Ramirez, a journalism professor with whom he enjoys an ill-defined romantic friendship. Author Charland has a gift for subtle satire, and he astutely exposes the comic absurdity that lies at the heart of the “rhetoric of bureaucrats”—especially the high-minded, academic variety. He’s a retired college professor, and he has a feel for the bizarre machinations of academia, showing them to employ a peculiar combination of intellectual power and administrative fecklessness. At the heart of the story is his grim but insightful diagnosis of the higher education industry, which he portrays as increasingly expensive but more incapable of fulfilling its mission. Overall, Charland’s satirical sendup is worth reading for its wry wit, but its unflinching but still-hopeful account of contemporary university life makes it memorable.

A buoyant farce that intelligently captures the current crisis of American higher education.