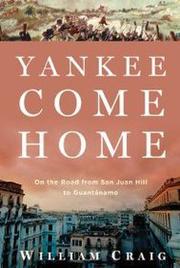 On the Road from San Juan Hill to Guantánamo

With a half-century of U.S. antagonism to Cuba’s revolution as the back story, a freelancer visits the island nation to report on both its history and current situation.

Craig (Liberal Arts/River Valley Community Coll.) accompanied a touring chorus to gain access to the beleaguered communist outpost. Abandoned by the group’s guide, he made his own way, curious to see where his great-grandfather may have fought. Starting with Santiago de Cuba, where Theodore Roosevelt famously charged up San Juan Hill, Craig recalls the bellicose Roosevelt, cautious McKinley and the American takeover of the Cuban rebellion against Spanish rule. The author’s lively history follows locale, not chronology, and he analyzes sugar politics, empire building and the blood-spattered history of slaves, Indians and Spaniards in the New World. The author doesn’t cover the story of the sinking of the USS Maine, the ostensible casus belli for the Spanish-American War, until more than halfway through the text. We also learn about Cuban culture, including music, spirits, the real Ché Guevara, pickpockets, drinking habits and much more. Craig’s sprightly account ends back east with a surreal encounter with the local authorities in the town of Guantánamo as he tries to gain a view of the ominous American base.

The Spanish-American War was the quintessential journalists’ adventure. Craig beats his professional predecessors with his skilled and accessible personal journal and blunt history.