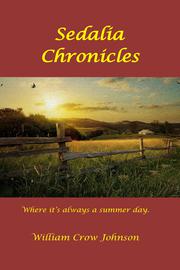 A volume of short stories probes the foibles and fascinations of the residents of a small Indiana town.

What goes for excitement in Sedalia may be different than in other places, but its residents are ready to swarm at the first hint of it. The nosy breakfasters at the local cafe speculate about an unknown car with New York plates that spent the night in a neighbor’s driveway. The idlers at the gas station are curious about how the local undertaker’s behavior has changed since the death of his wife. The sheriff has been getting reports of people buying night-vision goggles at the gun store, and the town doctor may be getting audited by the IRS. Nothing in Sedalia is too small to escape notice. “I mean, naked trucker, running along the bottom of the embankment below the northbound lane,” reports a state police officer at the beginning of one tale. “Nothing but shoes. Obviously trying to avoid being seen. Which is obviously impossible. We get eleven different calls.” Gossip is the fuel of the local discourse, though sometimes the really interesting things are the ones that don’t get said. People who spot bears, for example, can’t tell anyone about them given that the Department of Natural Resources’ official line is that there are no bears in Indiana. Most people born in the town stay in the town. Sedalians tend not to fare as well when they try to make it in the wider world, as with Wanda Sue Blankenship. Wanda moves to New York to be a lawyer and tries to hide her Southern Indiana accent—unsuccessfully. In these 19 stories, the residents of Sedalia are held up for readers’ appraisals, though they can never be judged as thoroughly by an outsider as they are by one another.

Johnson’s prose is easy and wry, perfectly calibrated to the speed of life in his fictional, eponymous municipality. “The skinny young man lay asleep in a filthy sleeping bag just a foot from the edge of the bridge abutment,” begins one tale about an anti-capitalist hitchhiker who has a short but memorable stay in town. “The drop to the dry stone river bed was fifteen feet. His head lay on folded pants, his long brass-colored hair hopelessly tangled. The snore suggested nasal occlusion.” The author has a knack for pinpointing not only the way characters look to the people around them, but also how they appear to themselves. Sedalia’s slight inferiority complex regarding the rest of America—and its snooty neighbor, Elmira, Indiana—is a recurring theme. “Dysfunction in the Mole Challenge Group” is a particular standout, but the strength of these stories is the way that characters weave in and out of them, offering a larger view of the dynamics of the town. Neighbors who appear in one piece are often explored at length in another. As in Sherwood Anderson’s Winesburg, Ohio and subsequent works of locality-based fiction, Johnson’s book manages to simultaneously poke fun and celebrate small-town American life.

A humorous, charming collection of tales set in a Midwestern town.