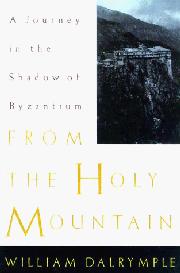 FROM THE HOLY MOUNTAIN

Journey Among the Christians of the Middle East

A memorable historical journey through the twilight of Eastern Christianity in the Middle East, heartfelt and beautifully told. Dalrymple (The City of Djinns: A Year in Delhi, 1994) has carved an unorthodox niche for an English travel writer: He is following in the 1,400-year-old path of an Orthodox monk. In 587, Friar John Moschos and a young student trekked across the Middle East, collecting precious relics and manuscripts from obscure monasteries, from present-day Turkey to Egypt. Dalrymple’s quest is similar; he is preserving the stories of the last generation of Orthodox Christians in the Middle East. Retracing Moschos’s steps, Dalrymple finds once glorious Christian communities on the brink of extinction. One Turkish village that had 17 Syrian Orthodox churches —now has only one [Christian] inhabitant, its elderly priest.— In Turkey, Armenian Christianity has been more systematically erased, with cathedrals renovated into mosques, gravestones obliterated, and any mention of the Armenian presence in Turkey censored from publications, turning their existence into a historical myth. In one town, Dalrymple interviews a superannuated survivor of the Syrian Christian resistance of 1915, when Syrians witnessed the genocide of the Armenians and knew that they were next to be deported. Today, however, the descendants of Orthodox Christians in Turkey and elsewhere are emigrating as quickly as they can. Old churches stand abandoned or are employed for other purposes—in Istanbul, for example, Dalrymple is denied entrance to a famous basilica because there is a Turkish beauty contest going on inside. Dalrymple is a talented writer, with a subtle wit, a keen eye for historical irony, and a relish for architectural detail. If his treatment of Eastern Orthodoxy is somewhat romantic, ignoring centuries of internecine conflict among various ethnic groups, it is understandable given his urgency to record the plight of this last generation of Orthodox practitioners in Muslim-dominated areas. An evensong for a dying civilization. (24 b&w and 8 color photos, not seen)