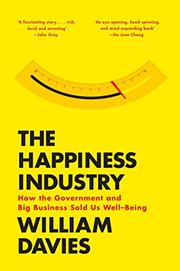 How the Government and Big Business Sold Us Well-Being

Durable reportage on governmental and commercial attempts to influence and propagate national well-being.

British sociologist and political economist Davies (The Limits of Neoliberalism: Authority, Sovereignty and the Logic of Competition, 2014) scrutinizes an increasingly desirous yet elusive commodity: human happiness. He asserts that proof of well-being lies in scientifically measured studies with verifiable data, not with advertisers and pharmaceutical companies “watching, incentivizing, prodding, optimizing and pre-empting us psychologically.” The author profiles 18th-century philosopher Jeremy Bentham and discusses how his doctrine of utilitarianism might also be applied to modern theories of individual happiness. Davies believes a race has begun to discover and ultimately develop what motivates human psychology in order to apply methods of achieving contentment across a broad spectrum of societies. Spurred on by capitalism and strategically manipulated technology, influential corporate tastemakers have long sought to tap into (and capitalize on) the secrets of personal happiness by way of behavioral economics, advertising, and the often ethically dicey involuntary monitoring and calibration of human satisfaction. A section on how happiness quotients are actually measured—whether through a smile, a pulse rate, or a particularly impulsive purchase—makes for contemplative reading. Through neuroscientific research studies addressing everything from workplace satisfaction to the depression epidemic, Davies shares a wealth of relevant information that points to the vast marketing potential of commercializing the concept and achievement of universal human bliss and the “limitless pursuit of self-optimization.” Also significant is whether personal contentment can be bought, sold, managed, and manipulated via the global economic marketplace. If it hasn’t happened already, Davies writes, governmental and corporate entities are hard at work converting the concept of happiness into a “measurable, visible, improvable entity.”