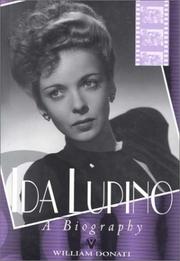  A respectful overview that lets an icon of women's filmmaking emerge as a full-fledged human being, social crusader, and artist. As in My Last Days with Errol Flynn (not reviewed), which he coauthored, Donati uses abundant research to coax readers to a broader understanding of his subject--in this case, to reestablish Lupino's (191895) position as a top film actress and discuss her directorial accomplishments in aesthetic rather than gender-related terms. Born into a generations-old stage family in England, the teenage Lupino was already an experienced actress when summoned to Hollywood in 1933. The big-studio years that follow comprise some of the book's liveliest passages, partly because Lupino's star was on the rise (she earned more than Bogart in High Sierra) and partly because her Hollywood cohorts, particularly the moguls, live up to their stereotypical dazzle. Jack Warner pegged Lupino ``another Bette Davis''; Columbia head Harry Cohn pronounced, ``You are not beautiful, Ida, but you've got a funny little pan.'' Years of acclaim followed (The Hard Way, Pillow to Post), until 1947 when her contract with Warner Bros. was canceled. Over the next decade, she wrote scripts and formed a production company, Filmakers, making movies about social problems others avoided--illegitimacy, rape, polio. For two decades she was a respected film and television director (Hard, Fast and Beautiful, The Hitchhiker), hailed for her economical, fast-paced style. Throughout her life she was known for her professional largesse, giving several people an early break, notably director Sam Peckinpah. While this book enthralls with the glamour of a high-rolling Hollywood life, its restraint is refreshing. Donati treads lightly over common tell-all stomping grounds--three failed marriages, affairs, career decline, estrangement from her only child, Bridget. Ida Dearest will have to be written by someone else. A welcome, gentlemanly work on a lauded yet underappreciated figure. (24 b&w photos, not seen)