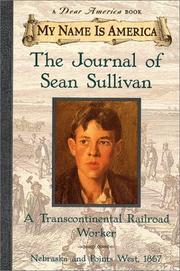 THE JOURNAL OF SEAN SULLIVAN

In the My Name Is America series, Durbin (Wintering, 1999, etc.) offers the story of Sean Sullivan, whose first day in Omaha, Nebraska, brings him face to face with a victim of an Indian attack; the man survived, but carries his bloody scalp in a bucket. It’s August 1897, and Sean has just arrived from Chicago, planning to work with his father on the Intercontinental Railroad. Pa, who carries terrible memories of his stint in the Civil War and of the death three years ago of Sean’s mother, is already a foreman for the railroad, but Sean must start at the bottom, as a water carrier, toting barrels of it to the thirsty men who are doing the back-breaking work on the line. At night, everyone is usually too tired to do anything but sleep, but Sundays are free, and Sean discovers the rough and rowdy world of the towns that seem to sprout up from nowhere along the railroad’s path over the prairie. Through Sean’s eyes, the history of this era and the magnitude of his and his fellow workers’ achievements come alive; Durbin has no trouble making Sean’s world palpable, and readers will slog along with Sean every step of the way on his long and arduous journey to building a railroad and becoming a man. (b&w maps, photos, reproductions) (Fiction. 8-14)