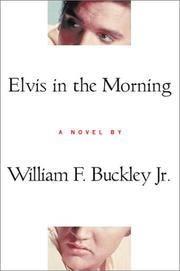 ELVIS IN THE MORNING

The fresh and amusing, if somewhat unfocused, story of an idealistic young man’s lifelong friendship with the King of Rock ’n’ Roll.

The storyline on surface seems to have sprung from the mind of some unreconstructed, wacked-out liberal like Tom Robbins than by archconservative pundit and spy novelist Buckley (Spytime, 2000, etc.). Orson Killere is a bright lad who spent his childhood years on an army base in West Germany during the 1950s, his mother a general’s personnel administrator. Even though he’s extremely studious and not much for playing around, Orson does delight in one rather serious obsession: Elvis Presley. Misinterpreting the social utopian views about private property from one of his teachers, Orson decides that the entire world should have access to Elvis records. When he’s apprehended by the police for stealing Elvis records from the PX, the story makes the Stars and Stripes and so impresses Private Presley (stationed nearby) that he shows up at Orson’s house and treats him to a private concert. From then on, Orson and the King are fast and improbable friends. Buckley wisely refuses to play up the kitsch value, sticking to a generous portrayal of Elvis as a decent-enough, albeit delusional, musical genius who goes nowhere without his close coterie of advisors and friends (the “Memphis Mafia”) but will drop everything to have a long chat on the phone with Orson, wherever and whenever. Through all of Orson’s misadventures around the country—he’s expelled from a university for protesting, rides the rails through the West, even meets Barry Goldwater briefly—the tone is inconsistent and spotty. Often, just when you feel as if you might be getting to know the protagonist, a phone call comes from one of the Memphis Mafia and Elvis takes the stage again.

Too strange for fans of Buckley’s Blackford Oakes series (A Very Private Plot, 1994, etc.) and not Elvis-centered enough to please his vast fandom, but it’d be a shame if a story this unpredictable and fun fell through the cracks.