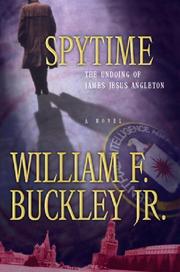 The Undoing of James Jesus Angleton

Another espionage yarn from Buckley (The Redhunter, 1999, etc.), this time based not on the exploits of his series character, Blackford Oakes, but on those of real-life counterintelligence officer James Jesus Angleton.

Loosely using the life of Angleton as the framework of his tale, Buckley offers a highly dubious account of the cold war years between the end of WWII and the end of the war in Vietnam. The story begins with Angleton’s exit from the CIA in the mid-1970s, then flashes back to his introduction into the life of a secret agent. In the interim we’re introduced to young Tony Crespi, a protégé of Angleton’s who finds himself in pursuit of another real-life figure, British turncoat Kim Philby. There’s plenty of information here—obviously Buckley knows his stuff—but the story, ranging from Italy and the death of Mussolini through Washington and the Bay of Pigs and on to Beirut and Middle East intrigue, is a mess. There’s only a wisp of a plot and very little conflict; the structure is confusing; and the character development is practically nil. Worse, the book is clumsily written, loaded with sentences either as long and impenetrable as the hallways of the Pentagon; or just clunk-plain awkward (“His briefing in Rome was exhilarating, Angleton confessed to Enrico Caruso, his security contact, the only man with whom he had official communication, the law of the deep-cover agent, at their fourth and final meeting”); or sounding as if they might have been translated from another language (“Maria described, using the local map he carried, the route he had to take”).

Surely James Angleton was an interesting fellow, but you wouldn’t know it from this unsuccessful attempt at a fictionalizing of his life.