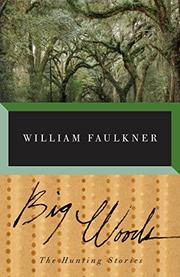 A gift book, this, with illustrations by Edward Shenton, and containing the hunting stories spanning two generations and set in the Big Woods, thirty miles from Jefferson. Uncle Ike, connecting link in the stories, was a boy turned ten when he was first "blooded" and shortly after that his mentor, Sam Fathers, more Chiclasaw chief than Negro, left the habitations of man and look up permanent residence in the Big Woods where his true love was centered. De Spain and Compson and Hogganbeck were alive then, and some of their descendants are in the final story when young Ike is old Ike. The land had changed then too-and civilization had made the Big Woods no longer wilderness. But it is the wilderness you feel in these stories, The Bear. The Old People; A Bear Hunt; Race at Morning (now for the first time in book form) — and the unique connecting links, prose poetry, philosophical, ruminative. Once one gets into the beat and rhythm of the telling, the stories carry themselves. A special plus item- not to be handled as a big new Faulkner.