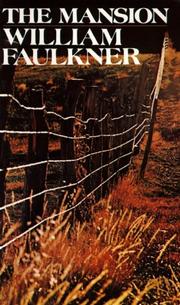 This third and final volume of a trilogy (preceded by The Hamlet in 1940 and The Town in 1957) traces the pattern created by the lives of the indomitable Snopes clan from 1908 through the aftermath of World War II. Faulkner divides this work into three sections, each of which is named for a member of the Snopes family: "Mink", the petulant bitter, and child-like farmer who kills Jack Houston and spends his 38 years in Parchman Penitentiary planning the murder of his cousin Flem who failed to come to his aid at the murder trial; "Linda", the daughter of Eula Varner (Flem's wife) who marries a Greenwich Village sculptor and goes with him to fight in the Spanish Civil War, where he is killed, and she becomes deaf and returns to Mississippi; and finally "Flem", the Snopes for whom even the life of a wife and daughter are not too much to sacrifice in his selfish, fierce, and ignorant struggle for money and material control. Mr. Faulkner has been writing about the Snopes family for 34 years, and there is not a particle of their characters or their little world of Yoknapatawpha County, Mississippi, that he does not know intimately. Those readers who are acquainted with the Snopes family and the author's highly distinctive stylistic mastery will not be disappointed in this book and will, I think,agree that "Linda" (the middle section) is one of Faulkner's most sensitive and intensely dramatic creations.