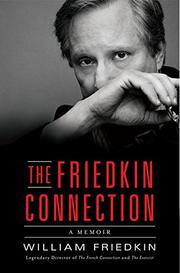 The Oscar-winning director of The French Connection and The Exorcist looks back at his life and work.

Friedkin writes that his career began accidentally, interviewing for the wrong job but landing a spot in the mail room at WGN in Chicago (“By the way, kid, are you stupid?” his interviewer asked), and from there working his way from one job to the other, learning the crafts necessary to make a show—and then a film—through trial and error: “Will the floor manager please keep away from the camera?” he was once asked. Lessons learned, he moved west to Los Angeles, where he fell into friendly competition with his contemporaries, foremost among them Francis Ford Coppola, and steadily built a résumé as a reliable filmmaker able to coax the best performances out of actors. There’s plenty of inside baseball here, but Friedkin is more interested in discussing the technical details of his films; we learn, for instance, that “there was not a lot of dialogue looping” in The French Connection, for all the noise on the New York streets, and that Max von Sydow was so tall that he “had to develop a slouch and arthritic movement” for the character he played in The Exorcist. A surprise, given Hollywood’s secular nature, may be the revelation of the depth of Friedkin’s religious faith—even though William Peter Blatty, who wrote the story of that spooky flick, accused him of “having undercut the film’s moral center.”

For aspiring directors, a glimpse into the school of hard knocks, but there’s plenty of good stuff, lean and well-written, for civilian film fans, too.