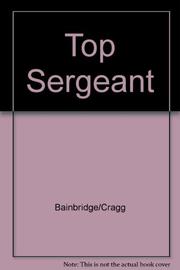 The Life and Times of Sergeant Major of the Army William G. Bainbridge

The dull-as-dishwater memoirs of a good soldier who rose through the ranks to become the US Army's top noncommissioned officer. Bainbridge enlisted shortly after graduating from high school in 1943. He fought in the Battle of the Bulge and was taken prisoner by German troops toward the close of 1944. Released at the end of WW II, he returned to his midwestern roots to resume farming. Recalled to active service for the Korean conflict, Bainbridge never left the States. He did, though, acquire a taste for the military life and decided to stay in. Bainbridge (as much a bureaucrat as a warrior) made steady progress in his chosen profession. Following a Vietnam tour, he was given increasingly responsible assignments at a host of duty stations in the US and overseas. In 1975, the author was named Sergeant Major of the Army, a Pentagon-based post he was the first to hold for four years. Mustered out of his beloved Army after 31 years of active service, the ex-noncom (who will turn 70 this year) spent the next 12 years as secretary to the board of commissioners for the US Soldiers' and Airmen's Home in Washington, D.C. Nominally retired, Bainbridge still travels to reunions and armed-forces conferences. Cursed with total recall, he burdens his narrative with inane particulars and minutiae (e.g., detailed rundowns on the quarters he occupied at bases throughout the world, guest lists for long-gone receptions, the routes taken on inspection tours or to reach new duty stations) and heavy-handed tributes to erstwhile COs and colleagues. Save for recurrent assurances about taking good care of the rank and file, he (and Cragg, coauthor of Inside the VC and the NVA, 1992) seldom assess anything remotely resembling a big picture. Autobiographical trivia with all the dramatic appeal of a DoD travel order. (8 pages photos, not seen)