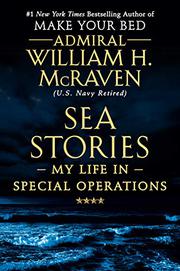 My Life in Special Operations

A retired four-star admiral serves up a readable memoir that’s long on blood and guts—including those of Osama bin Laden.

McRaven (Make Your Bed: Little Things That Can Change Your Life...And Maybe the World, 2017) grew up a military brat—and a Texan when his father was sent to San Antonio after suffering a mild stroke (“something to do with cigarettes and Jim Beam whiskey, the doctor would say”). He also grew up in the 1960s under the influence of James Bond movies and The Man from U.N.C.L.E., all of which would come into play when the young Navy ensign applied to become a SEAL, “reportedly the toughest physical training in the entire military.” Certainly the drill instructors worked McRaven hard; of an entering class of 155, he writes, only 33 completed training and became SEALs. He himself would serve longer than any other SEAL, rising to become the commander of the entire U.S. Special Operations Forces. His book is anecdotal but without many surprises for anyone with military experience, but his account of finding and killing bin Laden is one of the best in the literature, told from the eagle’s-eye viewpoint of one who oversaw the entire operation. There his story shines, full of twists and turns ranging from the politics of the military’s engagement with the intelligence community (“those CIA officers who disliked SOF the most seemed to be our staunchest supporters”) to confirming that it was indeed bin Laden the SEALs and other special ops troops had killed. (McRaven recounts ordering a 6-foot-2 SEAL to lie next to the corpse of the 6-foot-4 bin Laden to be sure that they’d gotten the right guy.) It’s a story with many heroes but of cold professionalism as well; as the author tells it, “I had no sense of relief, no internal exhilaration, no feeling of victory,” not until his men were safely home.

Readers interested in the essential work of military special forces will be inspired by McRaven’s adventures.