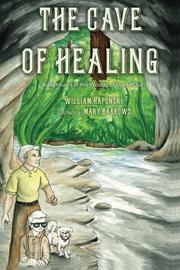 The Cave of Healing

Adventures in the Worlds of In and Out

In Haponski’s debut middle-grade fantasy novel, a veteran comes to terms with his war experiences and bonds with his granddaughter during visits to a subterranean world.

Henry is a veteran of an unnamed war who lives alone. He drove away his wife, daughter, and granddaughter after a descent into alcoholism caused by his inability to cope with his combat experiences. While walking his dog in the woods, he meets a boy named Squiggly from the world of In, who has skin that’s “almost translucent, similar to thin, white alabaster.” He’s convinced that Squiggly is a hallucination, but he answers the boy’s questions about our world, which Squiggly calls “Out.” Later, Henry begins to look forward to meeting the boy during his own daily walks with his dog, Mugs. He and Mugs eventually travel with Squiggly to In, where they ride on a blind cavefish, dine on wolf-spider eggs, and meet Squiggly’s family. However, Henry continues to believe that the other world is just a figment of his imagination. It’s not until he meets a therapist from In that he begins to understand how the place has allowed him to deal with the effects of war. Back in his own world, Henry gives up drinking, goes back to his own therapist, and begins to reconcile with his family. His granddaughter, Peggy, however, resists his efforts to reconcile until she makes her own visit to In, which allows her to understand and connect with her grandfather. In the book’s final section, she and Henry return to In for a dog show and have further encounters with cave creatures that are both endearing and terrifying. The book does a good job of presenting veterans’ challenges in an age-appropriate manner, showing the horrors that drive Henry without relying on graphic descriptions of violence. The book also makes it clear that recovery is an ongoing process. The world of In, whose inhabitants occasionally exhibit elements of aboveground culture, provides plenty of comic relief, particularly when Peggy watches a game of “fairball”—a variation of baseball in which the objective is to help the other team win.

A charming tale that explores responsibility, forgiveness, and the effects of war and balances it all with a strong dose of humor.