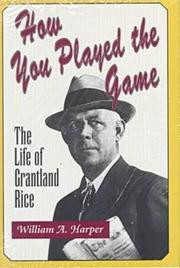 HOW YOU PLAYED THE GAME

The Life of Grantland Rice

A portrait of a true original who pioneered modern sports journalism, though he may be best remembered for his doggerel. Fresh out of Vanderbilt in 1901, native Tennessean Rice took a job as a reporter for the Nashville Daily News. Harper (Purdue Univ.) zestfully recreates the backdrop for Rice’s first piece—a 300-word story on a Southern League baseball game—and includes the quaint fact that he brought his typewriter with him. That was the beginning of a career that spanned 53 years and produced 67 million words, including 22,000 columns and 14 books. Rice wrote about, and often became friends with, the greatest names in sport: heavyweight champion Jack Dempsey; Bill Tilden, the preeminent tennis star of the 1920s; Babe Ruth; “The Galloping Ghost,” Red Grange; the great woman athlete Babe Didrickson; and Ty Cobb, the baseball legend whom Rice took credit for discovering. He also numbered among his friends and drinking buddies fellow writers Ring Lardner and Don Marquis and President Warren G. Herding. Harper includes a lot of information and has apparently exhausted the archives in writing of Rice’s career and friendships; it may seem too much for those only glancingly familiar with his importance. But he had considerable clout in his day and his megaselling autobiography, The Tumult and the Shouting, remains an important, if dated, contribution to sports history. Unfortunately, Harper also takes Rice’s poetry a bit too seriously (“But now the fast years hurry by . . . / Like meteors against the sky”). Though he did write the most memorable—and perhaps best—lead in sports history when he immortalized the 1924 Notre Dame backfield: “Outlined against a blue-gray October sky, the Four Horsemen rode again.” Harper’s style never quite gets to the inner man, but it almost doesn’t matter. His talent lies in sorting out his extensive research. (38 photos, not seen)