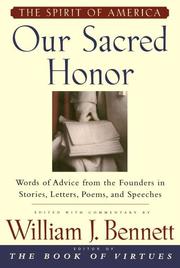 The Moral Thought of America's Founders

The indefatigable Bennett (The Moral Compass, 1995, etc.) continues his campaign to inculcate the old values into Americans generally—and young Americans more particularly—this time out by gathering selections from the writings of the generation that secured America's independence. The brief excerpts, drawn from speeches, letters, poems, and memoirs by both little-known patriots and by such luminaries as Benjamin Franklin, John and Abigail Adams, George Washington, and Thomas Jefferson, are divided into such categories as ``Patriotism and Courage,'' ``Civility and Friendship,'' ``Justice,'' and ``Piety.'' Bennett says that the volume is intended to allow Americans to ``see both our patrimony and our basic civic obligations; to keep our country safe and to hold our purpose high.'' There's no doubt that many of these passages are stirring and persuasive. But despite Bennett's brief introductory essays, the excerpts seem too fragmentary, and too admonitory, to be entirely compelling, and the larger context of the 18th century—a period of intense and but complex thought—is absent. Still, given the current enthusiasm for Bennett's crusade, the book is likely to be widely circulated. (First printing of 250,000; Book-of-the-Month Club/Quality Paperback Book Club alternate selection; author tour; TV satellite tour)