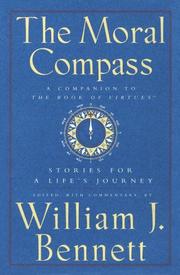 Stories for a Life's Journey

No moral ambiguities in another sweeping potpourri from the compiler of the 1993 bestselling Book of Virtues. From Disney's Pocahontas and its messages about greed and environmentalism to ironic Sufi parables of men more foolish than donkeys, every fairy tale has a moral. Some are more subtle than others. There's nothing subtle about the messages in this new assemblage of fables, inspirational biographies, poems, letters, and essays from the former secretary of education, presently an eloquent spokesman for traditional values. The stories are selected to offer children and young people ``unequivocal, reliable standards of right and wrong.'' This volume is organized according to life's passages, from earliest childhoodwith tales about how even the smallest children can learn to value obedience, family loyalty, and self-sacrificethrough adolescence, young adulthood, marriage, ``citizenship and leadership,'' and old age. For much of the material, Bennett foraged in turn-of-the-century schoolbooks. But there are also excerpts from such writers as Oscar Wilde, Anton Chekhov, Mark Twain, and even Raymond Carver and inspiring letters from the likes of Thomas Jefferson, Robert E. Lee, and George Washingtonthe last a general order against the use of profanity. From Native Americans, Africa, China, Scandinavia, Greek and Roman myth, and the Bible come tales of kings and princesses, saints and social workers, and poor people who profit spirituallyand often materiallyby working hard and helping others. No one can quarrel with hard work and family loyalty as moral lodestones, but in a world where, for instance, hard work often pays off with a pink slip and family loyalty gives us a Susan Smith, the needle of the moral compass sometimes begins to swing wildly. Nevertheless, a colorful patchwork of pieces that are irresistible for bedtime reading aloud and as spurs to family discussions about whether, in the name of compassion, your offspring should bring home a naked stranger. (Literary Guild dual main selection)