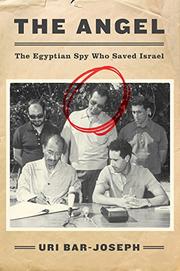 A detailed biography of Ashraf Marwan (1944-2007), an Egyptian national and Israel’s most vital informant.

According to Bar-Joseph (Political Science/Univ. of Haifa; The Watchman Fell Asleep: The Surprise of Yom Kippur and Its Sources, 2005, etc.), Marwan was an ordinary man with grand ambitions. His frustration with Egyptian politics led him to contact Mossad, Israel’s intelligence network. What is surprising is how early this occurs in the book. In the first chapter, the author covers his parentage, youth, marriage to President Gamal Abdel Nasser’s daughter, and daring decision to betray his own government. Equally surprising is how difficult this process was, given the complex Cold War landscape; at first, his plea was ignored. In order to explain this landscape to his readers, Bar-Joseph dedicates much of the book to the bellicose relationship between Egypt and Israel, spotlighting the importance of Marwan’s espionage. As Mossad director Zvi Zamir once put it, Marwan was “the greatest source we ever had.” The most intriguing part of the book is the third act, when Marwan is slowly unmasked. Without a doubt, he helped save innumerable Israeli lives, but he is also described as an egotist and thrill-seeker, and he was clearly paid well for his services. Early on, Bar-Joseph addresses the big question: why he would do something so dangerous and unpatriotic. “His behavior included a need for stimulus, which often drives people to take risks, whether physical or emotional,” he writes. “Some people take up rock climbing, skydiving, or bungee jumping. But Marwan was not drawn to the sporting life; instead he indulged in both gambling and, later, in unsavory business deals; or in taking needless risks in his contacts with the Israelis.” The author writes from an Israeli perspective, but he shows great empathy for a man who was in turn respected, reviled, and almost certainly murdered.

Well-researched and candidly told, this book deserves shelf space next to volumes on Vladimir Vetrov and Kim Philby.

SPIES OF NO COUNTRY
by Matti Friedman
Nonfiction

A SPY AMONG FRIENDS
by Ben Macintyre
Nonfiction