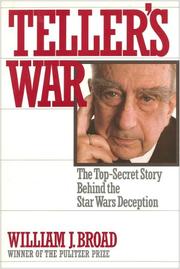 The Top-Secret Story Behind Star Wars

New York Times science-writer Broad (Star Warriors, 1985, etc.), twice a Pulitzer-winner, presents a refreshingly factual account of how physicist Edward Teller sold the Star Wars concept to two conservative Administrations—and adds some prescient comments on how to prevent such apparent abuses of power in the future. Teller, co-inventor of the hydrogen bomb, has long been known as one of America's most enthusiastic cold warriors. According to Broad, the charismatic Hungarian refugee's lifelong habit of spouting off innumerable wild scientific ideas, depending on peer review to separate out the good ones, turned dangerous as his increasing power and right-wing politics served to isolate him from his colleagues while winning him friends among conservative politicians. As a result, Broad says, when Teller became obsessed with the experimental X-ray laser project that would form the heart of Star Wars, he went straight to the White House to lobby for funds, ignoring a chorus of criticism from a wide array of experts. Teller's enthusiasm, the author explains, won the heart of Ronald Reagan, among other technologically unschooled officials, to the tune of $25 billion to date. Broad's thesis—that this phenomenal waste of funds (and Star War's potential to create instability among superpowers) was the result of a deplorable abuse of personal privilege, the defense industry's tradition of secrecy, and a lack of a governmental advisory panel for judging the technical merit of proposed weapons projects—is convincingly backed up by facts presented here. And it gives this tale of a man who in his enthusiasm may have betrayed ``the central principle of his profession''—and who continues to promote Star Wars' replacement project, Brilliant Pebbles—a particularly frightening resonance. A few gratuitous personal remarks (``Hungarians have a reputation for morose introspection, with associated high suicide rates'') detract from what is otherwise an important and eye- opening exposÇ. (B&w photographs and drawings—not seen.)