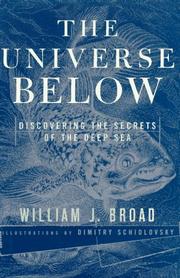 Discovering the Secrets of the Deep Sea

The exploration of the ocean depths is one of the newest of sciences; here's a capable summary of the progress to date. Broad (Teller's War, 1991), a Pulitzer Prize winner and science correspondent for the New York Times, notes that the first serious attempt to discover what lay beneath the waves came in the Victorian era, with the three-and-a-half-year round-the-world voyage of H.M.S. Challenger, commissioned by the Royal Society to sound the depths and retrieve specimens. In the process, it founded the science of oceanography. In the 1930s, William Beebe devised the bathyscaphe, a heavy diving vehicle designed to carry human observers a half-mile beneath the surface, an unprecedented depth. That began the systematic exploration of the deep. But as with the frontier of outer space, it was the military that was responsible for the greatest breakthroughs, in vehicles originally designed for submarine rescue and espionage. With the end of the Cold War, naval technology became available to civilian science, and deep-sea exploration suddenly flourished. Broad takes us through a number of its recent triumphs; the reader gets first-hand accounts of trips in a submersible to visit new underwater volcanic eruptions and to examine the ``black smokers'' that arise around fissures in the ocean floor. The exotic fauna that live in the superhot water around these submerged chimneys—huge tubeworms and bizarrely colored shrimp—have demonstrated that life can thrive in environments once thought utterly hostile to it. And the entire picture of how the surface of our planet has evolved was revised with the discovery of midocean ridges. Broad's sympathetic portrayal of the new breed of underwater scientists and explorers, and of their state-of-the-art equipment, make this a fascinating account of the newest frontier. (illustrations)