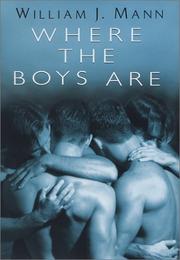 WHERE THE BOYS ARE

Against a background of sweaty bodies, fierce divas, and the drug-induced lust of gay circuit parties, former lovers struggle to reconnect.

Picking up where The Men From the Boys (1997) left off, Mann brings thirtysomethings Jeff O’Brien and Lloyd Griffith back together years after their relationship fell apart and their best friend and mentor Javitz died of AIDS. Jeff and Lloyd have traveled divergent paths in the meantime. Jeff, living in Boston, has become obsessed with working out, casual sex, drug use, and circuit parties where he can meet thousands of beautiful, shirtless gym bunnies on the dance floor. Lloyd, living in Provincetown, has found his spiritual side, remained celibate, and eschewed the narcissistic adventures his ex-lover has embraced. Despite these differences, when the two come together, old flames are rekindled and the men start to rebuild what they’ve lost. Complicating matters, though, is a web of secondary characters who keep interfering. Jeff has a circle of friends—including nebbish-turned-stud Henry, who looks up to Jeff the way Jeff once looked up to Javitz—who don’t want to see him settle down in domestic bliss. And Lloyd has an unbalanced business partner who’s jealous of Jeff’s intimate bond. Mann weaves this emotional tale deftly, shifting narrators from Jeff to Lloyd to Henry and giving insight into each one’s motivations. Two mysterious characters—Lloyd’s partner Eva and Jeff’s latest infatuation, Anthony—add interest by having secrets that are only gradually revealed. A breezily conversational tone makes for an easy read even as Mann grapples with complex questions facing many gays today: What does family mean? Why is trust so simple among strangers and so difficult between lovers? How can the patterns be broken that paralyze emotional growth?

Mann’s party boys make a sexy first impression but prove surprisingly deep upon further inspection. The same goes for Where the Boys Are.