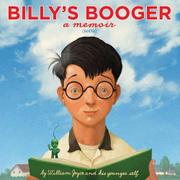 A boy funnels enthusiasm for monster movies, outer space, and snot into making a picture book for a school contest.

Back “when TV was in black and white, and there were only three channels,” a kid named Billy revels in the newspaper’s “funny papers” and in turning the numerals on his math paper into dinosaurs. Unfortunately, his math gets failing grades because the actual answers are incorrect. Even sports and supper bring out Billy’s wild side: pingpong paddle in mouth, scuba flippers on feet, mashed-potato–and-peas sculptures on his plate. “Your son has been very odd as of late,” says a school note to his parents. Then the school librarian announces a book-making contest. Billy researches “meteors, mythology, space travel, and mucus” and produces Billy’s Booger: The memories of a little green nose buddy, in which a meteorite crashes into Billy’s head, causing the titular little green guy to emerge—“BONK!!”—and become “Super Booger,” who specializes in math. Billy becomes a superhero too, specializing in invisibility and turning peas into chocolate. Joyce re-creates Booger here from a real book he wrote in fourth grade, preserving its manila-paper look and binding it into the middle of this book. The portions before and after, in contrast, feature zestful collage overlappings and retro-style illustration that slyly evokes old-school primers.

A zippy piece for readers who share Billy’s tastes.