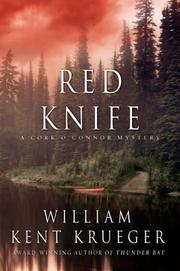 Payback makes the world go round in Cork O’Connor country. The code is inflexible and non-negotiable. So when Buck Reinhardt’s daughter is murdered and conventional wisdom pins the killing on Lonnie Thunder, Cork and the rest wait knowingly, a little like spectators in a Roman amphitheater. Never mind that Lonnie has made himself scarce. Since he’s alleged to be a member of the Red Boyz—a group of young militants operating out of the local Ojibwe reservation—Alex Kingbird, their charismatic leader, serves as a scapegoat to be slaughtered along with his wife, Rayette, for good measure. It follows that Red Boyz–baiting Buck Reinhardt, who was surely behind the grisly double murder, must in turn become a target. So it goes, with Cork (Thunder Bay, 2007, etc.) drawn ever deeper into the bloody vortex. Not that he appears to mind all that much, for Cork, Tamarack County born and bred, knows what’s in the air. Only Cork’s wife Jo and a few of the other women find the code out of kilter. But this is Tamarack County, where men rule and the eyes have it.

Colorful characters, spot-on sense of place, but the attempts to prettify vigilantism will leave some readers cold.