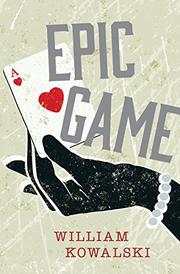 A professional poker player gets a surprising legacy from her only friend.

Kat Thomas learned to play poker from an expert: her own father. Although he carefully instructed her on how to read other people, how to bluff, how and when to go all in, and how to win, he lost almost everything of value in his life except for Kat. Since his death, the rule she’s embraced most completely is to play with her head and not her heart. The news of her friend Josie's death throws Kat off her game. Josie’s last wish was for her 10-year-old son, David, to stay with Kat for a month until his father could finish up some business abroad and collect him. Kat is stunned at the prospect of being even a temporary guardian. She knows nothing about children and has less feeling for them, and she’s trying to qualify for a big poker tournament in Vegas with a $1 million prize. As for David, who’s still in shock over losing the only parent he knows, he’s no happier with the arrangement than she is. But it doesn’t take long for the two to crack each other’s defenses. And when David’s father shows up early to collect him, Kat realizes that she may have been playing by the wrong rules all her life.

Although Kowalski (The Innocence Device, 2014, etc.) drives this brief tale toward an inevitable conclusion, it’s still an agreeable journey with a smart, sassy heroine who’s not nearly as tough as she likes to think she is.