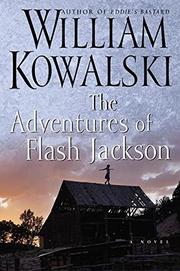 THE ADVENTURES OF FLASH JACKSON

Canadian Kowalski’s third outing, a follow-up to his debut (Eddie’s Bastard, 1999), offers an engaging, offbeat account of an All-American girl coming of age in a very strange town.

A backwoods village on Lake Erie, Mannville, New York, is the home of 17-year-old Haley Bombauer, who prefers to be called “Flash Jackson.” An inveterate tomboy (“a stuntman trapped in a female body”), Haley is laid up for the summer with a broken leg, sustained when she fell through the roof of her mother’s barn. Her grandmother, a strict Mennonite, lives as a semi-recluse in a cabin in the woods, and Haley is sent to stay with her for part of her recuperation. Grandma had always seemed a bit odd, but Haley soon finds out that she hasn’t guessed the half of it: not only is Grandma a witch, but she’s nearly four hundred years old! And the stream that runs alongside her cabin is the runoff of a sacred well. Has Haley gone off her rocker? Even if so, she won’t want for company. Her mother has a sixth sense that allows her to see into the future (as does Haley). Her neighbor Elizabeth Powell is a genteel ex-CIA agent who carries a Luger and speaks in a secret language (“Zammish”) to her friend Letty Horgan (who may also be a witch). There are other typical small-town types in Mannville (village idiot Frankie Grunveldt; Haley’s hunky sweetheart, Adam Schumacher), but they fade toward the background once Haley gets initiated into the craft and sets herself up as an occult healer. Eventually, she comes to see that the real world and the hidden one can coexist peacefully, and she settles down to a happy albeit somewhat odd domesticity with the birth of her son—who certainly has an interesting life ahead of him.

An appealing and original story that gets bogged down in its own originality: it would have worked better had the author pulled out fewer stops.