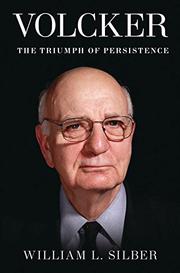 The Triumph of Persistence

From a fellow economist, an admiring biography of Paul A. Volcker.

Born in 1927, Volcker attended Princeton and eventually landed in the U.S. Treasury Department as an influential policymaker. In 1979, President Jimmy Carter appointed him chairman of the Federal Reserve, making the imposing man the most visible banker anywhere; Ronald Reagan retained Volcker as chairman. In some respects, Silber (Finance and Economics/New York Univ., Stern School of Business; When Washington Shut Down Wall Street: The Great Financial Crisis of 1914 and the Origins of America's Monetary Supremacy, 2007, etc.) delivers a conventional chronological biography light on Volcker's personal life. The author focuses instead on three daring policy battles that changed the world economic order: removing the U.S. dollar from its link to the gold supply; using fresh fiscal policies to tamp down high inflation rates; and President Obama's involving the octogenarian Volcker in the aftermath of the global financial crisis. Obama hoped, not entirely in vain, that the combination of Volcker's brilliant mind and untarnished reputation would lead to a more secure banking system through a combination of moral suasion, executive branch regulation and congressional legislation. While Silber is admiring, he provides copious evidence that Volcker is worthy of his credibility. Without Volcker in charge at certain intervals, he writes, the American financial system might have tipped from the verge of collapse into total meltdown.

Although not the first biography of Volcker, Silber's book is the most up-to-date and blessedly free of jargon.