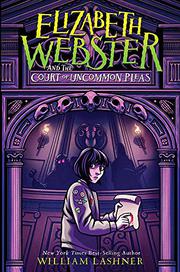 ELIZABETH WEBSTER AND THE COURT OF UNCOMMON PLEAS

From the Elizabeth Webster series, volume 1

A middle schooler discovers her calling.

Elizabeth Webster is hoping to get through middle school with as little a reputation as possible, but that gets complicated when star athlete Henry Harrison approaches her one day in the middle of the crowded cafeteria for extra help with his math lessons. It’s quickly revealed that Henry doesn’t need Elizabeth for math but rather to investigate a ghost that’s appeared in Henry’s house and is asking for Elizabeth by name. As Elizabeth and Henry work to get to the bottom of things, Elizabeth discovers secrets in her own past involving a long-lost grandfather, demons, spirits, an unsolved murder, and a profession that Elizabeth might just be destined for. Former federal prosecutor Lashner brings his legal expertise to the tale, crafting a spooky legal thriller for middle-grade readers that is just technical enough to feel grounded in reality and just unearthly enough to keep readers on their toes. This blend of ghostly apparitions and legal exposition should absolutely not work—but yet it does, engaging readers in a compelling mystery and a world that functions seamlessly. Twists and turns arise, but narrator Elizabeth’s spunky attitude and earnestness provide an emotional spine that couples with the novel’s mystery, dovetailing together at the right moment, making for a very engaging read. Elizabeth presents white; her best friend, Natalie, is Latinx; and Henry is black.