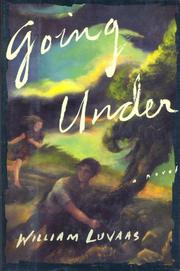 Luvaas (The Seductions of Natalie Bach, 1986) takes the story of a family in dysfunctional breakdown and muddies it terribly through the use of different narrators. Aunt Debbie speaks first, diving into an incoherent story about flooding rains when she and her sister Jerri were younger. The rest of the cast is introduced in rapid succession: Jerri's philandering husband, Don; Don's son Olson, from a previous marriage; and Jerri and Don's children, Meena and Jeff. Debbie, Meena, and Jeff then trade off narratives (although Meena's are in the third person), often repeating the same stories without adding any new insight. Jerri is quickly losing her mind and falling deeper into drinking. Don is casual enough about his wife's decline to leave a message for Debbie (a stewardess) that reads ``CALL URGENT. JERRI'S FLIPPED. LOVE, DON'' and to make crude passes at his sister-in-law. (``My half-brother, Olson, claimed Dad finger- jobbed Aunt Debbie,'' Jeff reports.) Meena begins losing her mind and believes that she is a spider. Even a stint at Tranquility Acres can't dry Jerri out completely. The family moves from Oregon to California, but nothing much changes, and hints of sexual abuse in the past and the present—including a false accusation—barely move the plot along. The language used by all the characters sounds inauthentic: Debbie has a fondness for unnatural expressions like ``shit crystals''; Jerri's dialogue is awkwardly written to convey slurring (``Don' you ged it?''); and Meena favors slang like ``retro'' and ``weirdso-nerdso.'' Luvaas seems to want to confuse. At one point he has Olson befriend a boy named Olsen so that readers need constantly to recall which is which. In one of the few bits of outside context given, Jerri is described wearing a ``Jackie Kennedy suit,'' so this is presumably set in the 1960s. But this is an insular, claustrophobic tale told in choppy sentences by an author who takes sophomoric delight in silly, dirty language. Hard to follow and hard to swallow.